Jason A. Riley has served as a Marine Corps infantry officer since 2003, and is currently a Major in the Reserves. While on active duty, he served with 1st Battalion, 2nd Marines and deployed twice to Iraq. He also served as a Combat Advisor to the Afghan National Army in an Eastern province of Afghanistan. From 2009 until 2011, Jason served with the Marine Corps’ Combat Hunter program, where he led a team of instructors, developed curriculum and courses, and taught behavioral analysis. He currently serves with a reserve unit in Southern California, and is enrolled in Command and Staff College. He is also a PhD Candidate, has published in academic journals, and has co-authored two books, including Left of Bang. 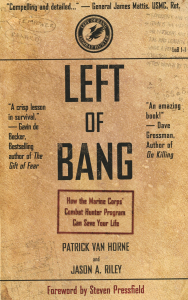